Okay, let’s look closer at whether or not the lockdowns were effective at limiting the spread of COVID, and limiting the deaths from COVID.

To do so, we will compare a couple of states, one that did a lockdown, and one that didn’t.  The states share geographic location, population size and density, and comparable size of their largest city.  The primary difference, one locked down and one did not.

We will begin by showing you a chart comparing the two states and their “new cases” on a seven-day rolling average.

See if you can tell which state is the lockdown state, and which is not. 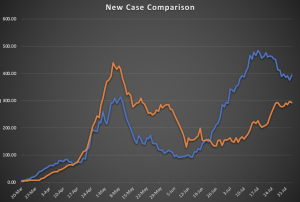 Can you tell which color is for the state that locked down?

My primary question has always been, if it is not obvious that the lockdowns work, why would we use them?

I have long argued, going back to March, that lockdowns were not warranted because all they do is delay the infections; they do not prevent or stop the spread.  And this graph completely backs up that theory.  The data is starting to come in, the theoretical and philosophical justifications for lockdowns have not stood up to the facts.  The models were wrong because they were given flawed information.

Let’s take a look and compare the deaths for each state. 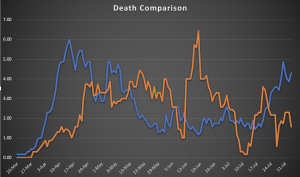 Again, can you tell which is the lockdown state and which is not?

The deaths do not quite follow the same pattern as the number of “new cases,” they are a lot more random.  But again, I think the chart makes the point for me.  If you cannot tell the difference between a state that did lockdown, and one that didn’t, what was accomplished?

The lockdowns did all that damage, but there is no discernible advantage gained against COVID.  Feel free to read this sample from my book about lockdowns if you are unaware of the damages.  But beyond the damages caused, the bottom line is that the lockdowns failed to reduce the number of COVID infections or deaths.  Destruction caused, but no advantage gained.

The two states share geographic location, have similar population size and density, and their largest cities have similar size.  I challenge you to find a better comparison.

One state locked down, one did not, but there is no discernible difference between their results in total cases or deaths.  So, what was the point?

The lockdowns were an entirely unwarranted experiment that was ineffective and caused more damage than COVID ever could have by itself.  We destroyed our economy, eliminated jobs and wreaked businesses, damaged children and families, increased suicides and overdose deaths, reduced the health and mental health of the entire population for what?  Absolutely nothing except lots of media and political attention.  Sorry folks, you were hoodwinked.

For more information on how and why you were hoodwinked, you can find my book on Amazon.