The lockdowns failed miserably in reducing COVID infections or deaths.  Let me show you the proof?

In part one of lockdown failure, we compared two states that shared geographic location, population size, population density, and size of their largest city.  These two states were Kansas and Nebraska.  The primary difference between these two states is Kansas utilized a lockdown, and Nebraska did not.  Here is a chart of their new daily cases since the beginning of the COVID pandemic.

Kansas locked down and is blue.  Nebraska did not lockdown and is orange.

As I have long argued, the lockdowns were never going to reduce or eliminate the number of infections.  All they would do is delay them.  Once you opened back up, the infections were still going to take place.  The comparison between Kansas and Nebraska proves the theory was correct.  Kansas locked down and had fewer infections initially, but once they opened back up, their infections soared above Nebraska’s.

All the damage caused by the lockdowns (please read here) was self-inflicted because it was a flawed theory that has proven incorrect.  It was an experiment that failed.  COVID did not cause those damages; our leaders did.

Now, while the Kansas/Nebraska comparison is as good a comparison you can get, there is another one just as good.  We will compare two other states that border each other, Arkansas and Mississippi.  Mississippi locked down, while Arkansas did not.

The two states share geographic location, have a similar total population, similar population density, and comparable size of their largest city.  This is also as good of a comparison as you can get. Let’s check the results.

Here is a chart of both state’s number of new cases of COVID on a rolling 7-day average.  Can you guess which graph is the lockdown state? 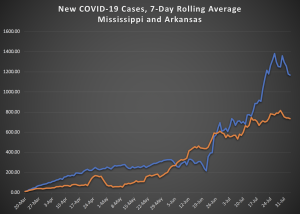 It’s pretty obvious which state instituted a lockdown, right?  Except it’s not.  The only give away is the surge in the blue line, Mississippi, which took place after they ended their lockdown.

Again, these states share geographic location, population size and density, and size of their largest city.  Mississippi (Blue) locked down due to COVID, and Arkansas (Orange) did not.  Can anyone make an argument that the lockdown worked?  If you can, it will be very thin.

The effectiveness of lockdowns was and is entirely theoretical, and the data has shown that those theories were wrong.  Our governments caused us all considerable harm for what?

“But wait, the lockdowns saved lives.”

Okay, let’s check the data. Let’s look at the number of deaths in each state on a rolling 7-day  average.

Did the lockdowns save lives?  No, that is a big fat lie.  The state that locked down had considerably more deaths than the one that didn’t.  The lockdowns were theoretical, philosophical bullshit based upon flawed mathematics (“models”) that resulted in significant damage, and did nothing to reduce COVID infections or deaths.

Here are the two most recent reviews from readers.  There are more reviews and a free sample on Amazon.

Look, if you believe everything you were told I challenge you to read this book and dispute the conclusions.  It will be a epiphany for you.  Plus, it is free if you are a member of KindleUnlimited.