So, I get up this morning and go through my usual routine.  I begin by looking into the COVID charts from around the country and the rest of the world.  I typically resist looking at any of the “news” sites because I have learned that they are more interested in developing my perceptions than providing information.  However, I am curious about any new antibody studies and hit google.

This article from Newsweek pops up.

My first thought is, wait, that can’t be right.  From what I have read and been observing in the charts, we are absolutely making good progress towards herd immunity.  And then I remember, oh yeah, Trump has some new guy who seems to like the herd immunity concept, so it has to be the worst thing in the world, and obviously will not work.  The media will be obsessed with attacking the concept, thus the headline.  Thanks, Trump, now we can’t have an honest conversation about herd immunity.  But I am going to try anyway.

Let’s take a closer look at the results of the study.  Here is the link to the study on Lancet if you want to read it yourself, but I will give you the highlights.

We will begin by looking closer at that third number.  9.2% of individuals who have protective antibodies were diagnosed with COVID.  Meaning, only 9.2% of people who were infected are confirmed cases.  You see, confirmed cases are only a small percentage of overall infections.  So, 90.8% of people who become infected with COVID do not get tested. 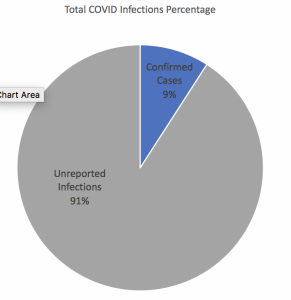 The 9.2% number is based upon research from Johns Hopkins but has been reinforced by studies around the world.

The study found that 27.2% of individuals in the Northeast had antibodies.  So, it is safe to assume that our method of determining the total number of infections is very accurate.

23% of New York residents having antibodies is outstanding news.  Why?  Because there is a good chance that New York reached a good herd immunity number by July.  Let me show you a chart from Coronavirusbellcurve.com about the spread of infections in New York to highlight my point. 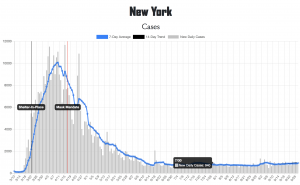 Were they still having new infections after July?  Yes.  But they seem to have reached a level that kept the spread to a minimum.

Now, I realize that the next thing everyone says is, “well yeah, that’s because they are locked down.”  Or, “it’s because of masks or social distancing.”  Well, read my previous article to understand why this is all a myth.  It is the level of infected individuals that is the biggest brake on infection spread, not the mitigation efforts.

Here are a couple of other Northeast states. 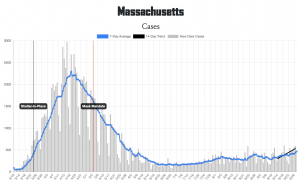 Now, we get to the really good news.  As we just discussed, the study revealed that 27.2% of those living in the Northeast had developed antibodies which is why they were not having significant outbreaks.  But, the antibody numbers were much lower in the South, Midwest, and West.

However, keep in mind, this was at the end of July.  Some of our more populated states in those other areas had significant outbreaks in August and September.

Here are a few visual examples to show you what I am saying. 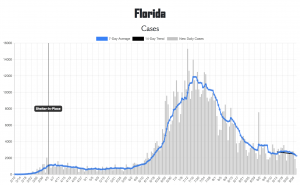 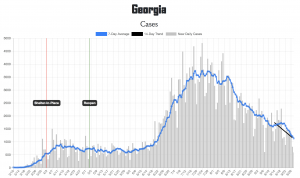 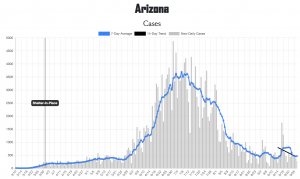 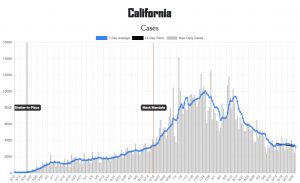 These areas had their outbreaks after the study was completed.  So, the number of people in those areas who had antibodies at the time of the study were lower. But that is no longer the case.  Now, more areas have joined the Northeast in having a higher number of recovered people with antibody protection.

And keep in mind, these areas controlled infection by opening up and allowing infection, not by locking down.  They allowed spread to control spread.  Florida is completely open now and still not having any significant outbreaks.

The more areas that reach the threshold number of infections, the more people who will have protective antibodies, the more brake on infection spread we have, and the closer we are to the end of COVID.

Let’s pull this all together.  With all those additional outbreaks taking place and subsiding in August and September, the total number of US confirmed cases is nearly twice as high as it was in July.

Man, that is excellent news.  23% of the population with some level of protection is a good brake on infection spread.  You can see that on the charts above regarding the northeast.  We are nearing the threshold number of infections, no matter how many times they tell us it “remains out of reach.”

Of course, we are not out of the woods yet.  There are still areas of the county that are more isolated or continue to delay opening up entirely.  Plus, infections can come in from other countries.  But even if they do, the ability for COVID to spread is being disrupted, which means we are closer to having this pain in the ass under control than we are from having significant outbreaks.

Remember, what made COVID so dangerous was that it was a NOVEL coronavirus.  It WAS novel but is not now, and never will be again.  The headline from Newsweek could not be any more wrong.  We are coming ever closer to the herd immunity threshold, which is outstanding and uplifting news.  The big question, do we get there before they try to make everyone take a vaccine?

There is one absolute.  The media will continue to develop the perception of how terrible everything is.