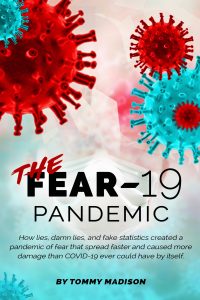 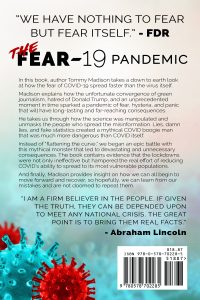 The FEAR-19 Pandemic is a book that exposes the misinformation (fake news) that was rampant within the media, politicians, and bureaucrats.  All of the information that I used was backed up with references in the back of the book.  This includes references for all the scientific studies I used to expose the lies, damn lies, and fake statistics that were used by the mainstream media and Democratic politicians.

The book exposes intentional misinformation and the book gets banned from amazon.

Here is the email they sent me.

As if that is not bad enough they include a link to give more information about the problem.  This is their justification for banning the book.

They want a variety of viewpoints unless of course, it offends their politics.  My revealing of misinformation from official sources is as objectionable as pornography from their viewpoint.  To make matter worse, I click on their Offensive and Controversial Materials link to see what it says, and…

It says right here that they do not ban books that are offensive or controversial.  Except they did.

Amazon is absolutely banning books from people who are exposing the media and Democratic politicians for lying to the general public.  I for one am disgusted and we should all be concerned.

When did false news become the only acceptable truth?

When did the truth become objectionable?

If you do not accept Mr. Bezos’s politics and their narrative than the truth is not only objectionable but worthy of being banned.

Update:  After one week and a lot of complaints from you all, the book was unbanned.  Thanks to everyone.